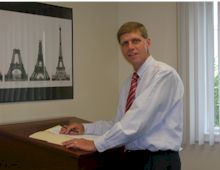 The following documents can be seen on his office walls:

Mr. Schroeder is a member of the Pennsylvania Bar Association and the Montgomery County Bar Association.
If you have a matter of law in an area in which he personally does not practice, he will see to it that you are represented by counsel whose practice specifically covers your needs.